THE GREATEST is an unprecedented event that we have been preparing for several months on the initiative of a couple of entrepreneurs, collectors and sports fans. Thus, since the first evocation of this beautiful project, new “models” have been invited to the studio for the constitution of a collection of 38 canvases that their owners intend for an atypical course.

David has therefore been working for a few months on portraits of great international champions. The list of these giants of the sports world submitted by the sponsors is initially very impressive (more than a hundred names). Some of them are real celebrities, others much more discreet. All of them have a story to tell beyond their sporting performances. Because the sponsors wish above all to highlight exceptional personalities from the world of sport who have or have had a major influence on the evolution of our societies. These champions who have left a lasting mark on our world. After being conscientiously documented on each of them, David has created 38 portraits of sportsmen and sportswomen who have particularly inspired him.

The sponsors intend this singular collection for a very good action: after several exhibitions in France and Switzerland, the paintings have been brought together in one and the same place, in Switzerland, where an auction sale will take place: THE OLYMPIC MUSEUM in Lausanne. The profits from the sale of these works will then be donated to the LEMAN HOPE association. The mission of this association is to restore hope and confidence to children and adolescents recently affected by cancer. Thanks to cruises organized on Lake Geneva, it allows all these young people to rebuild themselves psychologically and regain the strength to move forward in life. THE GREATEST, which already benefits from many supporters whom we thank very warmly, therefore aims to support the action of LEMAN HOPE.

You too can contribute to the success of this international event.

To get all information about the exhibition and the auction sale:

The charity auction The Greatest for Léman hope is now online on Arteal, as well as on Drouot

This is the collection of 38 portraits of these great names in sport: 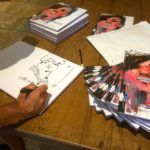